FREE Shipping on All Orders Over $55 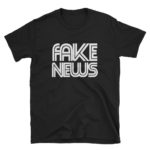 Once again we make sure that CNN is fake news as Mr. Trump has called them for years. This CNN Fake News t-shirt is made just for you, after that Mueller report found no evidence of collusion, to make fun of CNN and other mainstream media who hate Trump and been propagating against him for years. It’s your turn now to remind them of what they are: FAKE NEWS!
The words FAKE and NEWS written in CNN’s logo style, to give it a powerful meaning.

Also available as a sweatshirt, Mug, and premium t-shirt.

Don't worry, we are NOT Liberals, we don't spam.

We create awesome and unique custom apparel and accessories for proud American conservatives (or anyone not an angry liberal to be honest).
We guarantee the highest quality material on the market. No cheap Chinese stuff!

No products in the cart.